We Are Hands-On Partners in Your Journey With Glaucoma.

At The Eye Gallery, we understand the unique challenges and requirements that glaucoma places on the lives of the people it touches. As a team, we can work together to control your glaucoma, minimize its impact on your life, and manage its progression so that you can enjoy a lifetime of great vision.

An essential part of managing glaucoma is understanding its depth of progression. New technologies, which were unavailable even just a few years ago, allow our eye care team to take precise, up-close-and-personal photos of your inner-eye and optic nerve.

This intimate understanding of your eye health allows Dr. Baldwin to create and carefully monitor your treatment plan.

Schedule an appointment to meet with Dr. Baldwin and learn more about our approach to your eye health.

An estimated 3 million Americans have glaucoma, and half don’t even know it! Glaucoma accounts for about 12% of all cases of blindness.

Glaucoma is not yet 100% understood. What is known is that a rise in eye pressure can damage the optic nerve (which is responsible for enabling communication between the eye and the brain). However, glaucoma can also form when intraocular pressure (IOP) is normal.

Glaucoma treatment centers around controlling eye pressure. Medications, both eye drops and oral, exist that influence eye pressure. For most people, this management routine is sufficient.

Glaucoma has earned the nickname of “The Silent Thief of Sight”. Glaucoma often erodes vision, starting with side/peripheral vision, and does so without announcing its symptoms or drawing immediate attention to its progression.

Most people are unaware that their optic nerve is being damaged until after glaucoma has caused significant and irreversible vision loss.

One version of glaucoma – acute angle-closure glaucoma – presents serious symptoms that warrant immediate treatment from an ophthalmologist. These include:

Glaucoma is a bit of a misnomer. Glaucoma isn’t actually a single disease; the term “glaucoma” refers to a series of related eye diseases that cause vision loss through damage to the optic nerve.

There are many varieties of glaucoma. The two most common are primary open-angle glaucoma (POAG) and acute angle-closure glaucoma, which combined account for more than 95% of cases. Note that glaucoma is a lifelong condition that requires permanent management once diagnosed.

This version of glaucoma accounts for more than 90% of glaucoma cases and affects approximately 3 million Americans. It is called “open angle” because the angle between the iris and cornea is wide and open (as it should be).

It is caused by a gradual clogging of the eye’s drainage canals (which are responsible for allowing excess eye fluid to drain from the eye). As the canals clog, eye pressure builds and eventually damages the optic nerve.

Much less common than POAG, angle-closure glaucoma develops very quickly. It is caused by a diminutive angle between the iris and cornea, where the drainage canal is quickly clogged. This version of glaucoma causes the symptoms listed above and is quite painful.

If you are experiencing the symptoms of angle-closure glaucoma, seek medical attention immediately- your eyesight may be at risk! 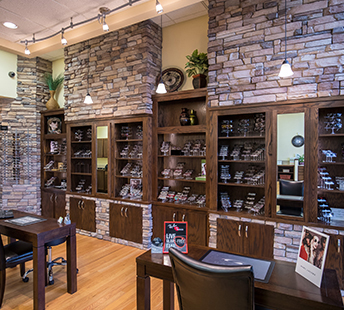 You can find our office east of highway 96 on 21st, right across from NewSpring Church. There is plenty of parking and easy access into our complex just off of Collective Lane.

Book Your Next Appointment

Dr. Baldwin has been wonderful to us. Her knowledge and thoroughness is very high and her staff are friendly, courteous and knowledgeable. We have been very pleased with the care and consideration we have received from them all.

I’ve never had FUN selecting glasses before. The Eye Gallery team is fantastic–who knew that getting new glasses is better than shoe shopping?

Dr. Baldwin and her team are amazing. Megan is a top notch optometrist and her team is well-trained and professional. You won’t find a better eye doctor in the Wichita area.

What an amazing experience. From the beautiful office, to the knowledgeable staff. The best part was how Dr. Baldwin actually listened to me and cared about the things that I cared about. I’ve had a lot of bad experiences with doctors in the past, but she dispelled them all in my first visit. I highly recommend to anyone.

I’ve been going to the The Eye Gallery for 2 years now and find Dr. Baldwin and her staff to be top notch. They are very easy to communicate with and offer excellent service.

Here Are Some of Our Brands

View Our Brands
Of Eyewear

Routine care has been resumed!

You are able to schedule online or call our office to be seen for an eye examination. We are following CDC guidelines to ensure sanitary and safe conditions for our patients as we resume normal care.